A heightened interest in foreign cultures throughout the nineteenth century led to the popularity of European art and literature of Oriental themes. With the establishment of new colonial territories and military conquests in North Africa and the Middle East, a number of artists began traveling to lands that they had previously only been able to imagine from the fictional tales of the Arabian Nights and plays (such as Shakespeare’s Anthony and Cleopatra and Byron’s Sardanapalus). The results of these journeys was an incredible array of paintings, sketches, drawings, prints, and photography of Oriental lands, peoples, and cultures, and this study of non-Western cultures eventually earned the name of “Orientalism.” Although many artists did visit the locations they depicted, their images are frequently a mix of both fact and fantasy, drawing on scenes and moments witnessed abroad as well as their preconceived notions of what an exotic, sensual, and barbaric non-Western world should look like.

Perhaps the most famous of the Orientalist painters, Delacroix traveled to Morocco and Algeria in 1832 as part of an ambassadorial delegation to the Moroccan sultanate. Though Delacroix had treated non-Western subjects in paintings previous to these travels (most notably the 1824 painting The Death of Sardanapalus based on Byron’s play Sardanapalus), Delacroix’s three-month journey to North Africa had a profound effect on his art and the cadre of Orientalist painting.

The opportunity to experience the exotic first-hand was an opportunity Delacroix embraced fully, filling several notebooks with hundreds of drawings and notes of the North African scenes and subjects he encountered. However, Delacroix’s journey is distinguished by the three-day stop in Algiers where he was allegedly able to gain access to a private Moorish residence and sketch its female inhabitants. As one of the only artists to gain entry to this private space typically inaccessible to Westerners, Delacroix’s painting Women of Algiers in their Apartment, based on the sketches from this visit, was perceived as an authentic and believable image of the Oriental harem. While the colors, decoration, and delicate details of the apartment and its beautiful inhabitants showcase Delacroix’s passion for his subject and attention to his art, studies of his sketches, journals, and accounts of the journey indicate that this image is a combination of both material from Delacroix’s documentary journey and his imaginative fascination of the exotic, combining to manifest as an Orientalist combination of fact and fantasy.

More works by Delacroix: Jewish Wedding In Morocco (1837) and Cleopatra and the Peasant (1838) 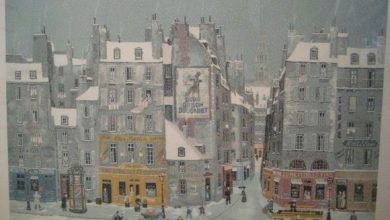