Renoir was one of the leading painters of the Impressionist group. He evolved a technique of broken brushstrokes and used bold combinations of pure complementary colours, to capture the light and movement of his landscapes and figure subjects. Following a visit to Italy in 1881 his style changed, becoming more linear and classical.

Renoir was born in Limoges in south-west France, where he began work as a painter on porcelain. He moved to Paris, joining the studio of the fashionable painter Charles Gleyre in around 1861-2. Courbet influenced the young Renoir. In Paris he encountered other painters, notably Monet and Sisley, who were later to become Impressionists. In 1869 he and Monet worked together sketching on the Seine, and Renoir began to use lighter colours.

Around the 1880s Renoir travelled abroad, visiting Italy, Holland, Spain, England, Germany and North Africa. He deeply admired works by Raphael, Velázquez, and Rubens, and the latter’s influence may be seen in his works.

Renoir’s work seems always to be about pleasurable occasions, and reveals no great seriousness in his subjects. He apparently shocked his teacher Gleyre by saying, ‘if painting were not a pleasure to me I should certainly not do it’. 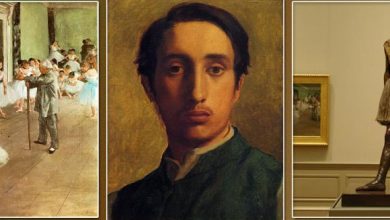