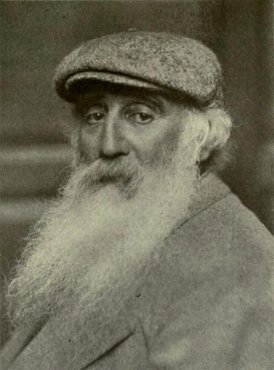 Among the French Impressionist’s painters, Camille was the one who was most famous. Camille Pissaro was born on July 10, 1830 at Virgin Islands in St. Thomas. His father was Portuguese-Jewish and his mother was a native Creole. Pissaro’s family had been living in the St. Thomas Danish colony. Pissarro was sent to study to Savary Academy, which was a boarding school in France. There he showed his passion for drawing. When he returned to his hometown, Pissaro had little interest in their family business so he just used his time making a sketch of picturesque port. Year 1852, he went to Venezuela and labored as a creative artist for almost two years.

In 1855, he then resided in France. Fortunately at the time of his arrival, there was an event called World Fair, an important Exposition Universelle that was all about art. At the fair, he met Corot and admired his works. Being advised by Corot, Pissarro soon started sketching and painting in small villages and near Paris, down the Seine, Oise, and also Marne rivers. Pissaro studied at Académie Suisse and had friends like Claude Monet, Paul Cézanne, and some future members of the Impressionist group. In 1860s, a prominent critic named Emile Zola praised his convincing realist landscapes.

Camille moved to England throughout the Franco-Prussian and the Commune War, and with Monet, Camille painted a progression of landscapes all around Crystal Palace and Norwood. While doing so, he studied English landscape painters around the museums. A year after the war, he went home to Louveciennes. Camille found out that out of 1500, only 40 of his paintings remained undamaged.

In 1871, Camille resided in Pontoise where he remained close to his friends for almost 10 years. Cézanne frequently came to accompany him and under Pissaro’s influence, Cézanne learned nature further with patience.

Paul Gauguin, a bank collector employee who showed interest in Pissaro’s artworks decided to be a painter when Pissaro encouraged him he and showed him some Impressionist works.

Like other painters of his time, Camille Pissaro became an enthusiastic anarchist. He made such a powerful impact on the bourgeois French society with his collection of anarchist drawings in Turpitudes Sociales on 1889.

Camille Pissarro gradually left Neo-Impressionism in 1890 and preferred a style which better allowed him to catch his feelings of nature, while retaining the purity and lightness of color being acquired during Camille’s divisionist phase. During his last years of his existence, Camille shared his time between Le Havre, Rouen, Paris, and also his residence in Eragny and he also painted several patterns of different elements of the city with different weather effects and light, while signifying the animation of the current city. A lot of his paintings are being considered among the best and it made a fitting ending to his long but eventful career.

As a brilliant teacher, Camille counted all his pupils which included Paul Cézanne and Paul Gauguin, his child Lucien Pissarro, and also the American impressionist who is Mary Cassatt.

Pissarro was vigorously painting up until the end of his life. When he passed away in autumn in Paris on 1903, at 73 years of age, he had lastly acquired civic recognition.

Some of his paintings are:
• He used oil in canvas as his medium in the following paintings:
o Two Young Peasant Women
o Effect of Sunlight
o Washerwoman, Study
o Bather in the Woods
o The Garden of the Tuileries on a Winter Afternoon
o A Cowherd at Valhermeil, Auvers-sur-Oise
o The Boulevard Montmartre on a Winter Morning
o Morning, An Overcast Day, Rouen
o Jalais Hill, Pontoise
o Haystacks, Morning, Eragny
o Poplars, Eragny
o Côte des Grouettes, near Pontoise
o Still Life with Apples and Pitcher
o Steamboats in the Port of Rouen
o Marketplace in Pontoise
o Fan Mount: The Cabbage Gatherers
o Barges at Pontoise
o Steamboats in the Port of Rouen
o Landscape at Osny
o The Harvest, Pointoise
• He used etching as his medium and drypoint on laid paper
o The Port of Rouen
• Etching and drypoint on china paper; second state of four
o The Maid at the Market
• Medium used was aquatint and drypoint on heavy wove paper; seventh state of seven
o The Cottage
• Drypoint and etching on blue laid paper; ninth state of ten
o Woman at the Gate
• etching and drypoint on laid paper; eighth state of eight
o Cowherd, at Water’s Edge
• Etching and drypoint on china paper; third state of three
o Goose Girl
• Lithograph on pink/gray chine collée; only state
o Cowherd
• Lithograph on chine collée; only state
o Group of Bathers
o Bather, Evening
• Monotype in brown/black ink on light blue laid paper
o Bather Standing Among Grasses at the Shore